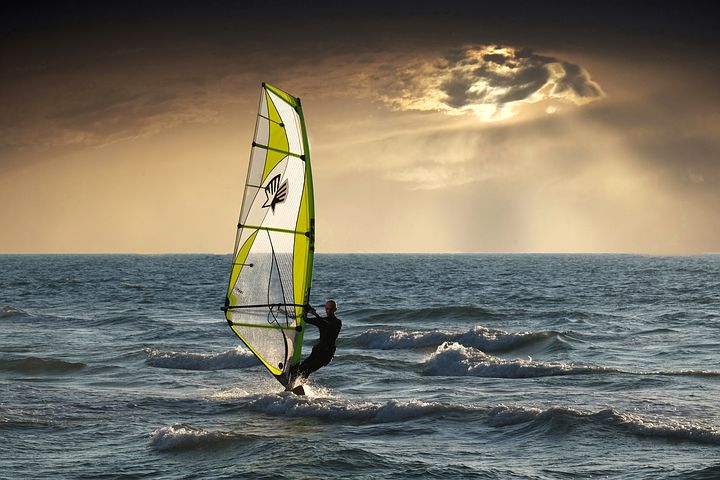 Windsurfing never fails to grab the attention of adventure-seekers. It is a fabulous combination of sailing and surfing, which is one of the main reasons for its popularity. The crux of this water sport is to keep a good balance on water while controlling the wind.

Usually, a 2.5-metre board is used for windsurfing with a sail connected to it. This sail can be moved to any direction. The skills of the windsurfer and the place of the activity determines the size of the sail. You might think that it is quite hard to master this water sport.

However, you can easily gain mastery over it with the right training. Over the years, many windsurfing schools have come up in different parts of the world. You can enroll in any of such schools near you and get trained in this adventurous water sport.

The origins of this outdoor activity can be traced back several centuries. During those times, it was not a sport or a recreational activity. The Polynesians used small sailing craft during winds to ride the waves. Inhabitants of the islands used to go on trips over the oceans with such sailing crafts. The rider stood upright on a solid board, which had a vertical sail attached to it.

Newman Darby is recognized worldwide as the inventor of this water sport and recreational activity. As a 20-year old, he conceived the idea of controlling his small catamaran using a handheld sail. The sail was mounted on a universal joint.

In 1964, Darby created the ‘Darby sailboard’ for a wider market. He focused more on introducing the young people to sailing as a sport than building wealth. Darby died at his home in Saint Johns, Florida, in 2016. He was satisfied with the recognition he received for playing a key role in the development of windsurfing.

The popularity of windsurfing

By the end of the 20th century, there was a slight decline in the popularity of windsurfing. There were many reasons for this fall. One was the acrobatic stunts performed by expert windsurfers, which were often shown on television.

It scared off many who wanted to try it as a recreational activity. There were some who wanted to go windsurfing only during strong winds. The third was the discovery of kitesurfing, which had a great appeal to many.

After the first decade of the 21st century, this water sport started to become popular once again. The promotion of the most popular windsurfing locations across the world attracted the attention of many. Among them were the newbies as well as experienced windsurfers.

The learning curve for this activity was shortened owing to the availability of wider and user-friendly boards. All of a sudden, there was a rise in demand for the equipment. It is easier for you to learn and improve your windsurfing today as its basics are taught online.

It is always advisable to get trained by an expert at a windsurfing school near you. And it may take years to master it, but you can become quite confident within two weeks of training.